Sound is mechanical energy that propagates in a fluid medium in the form of waves generated by a vibrating body. The elementary physical phenomenon consists of sinusoidal waves caused by oscillations in atmospheric pressure, propagating in all directions at a speed of 331.8 metres per second (in the air at 0° C).

Tone is a regular rhythmic oscillation that is always identical for a given molecular structure. The human ear can perceive frequencies between 20 and 20,000 Hz.

The human ear is only sensitive to sound pressure levels ranging from a lower intensity limit of 0 dB (audibility threshold) and an upper limit of approximately 130 dB (pain threshold). 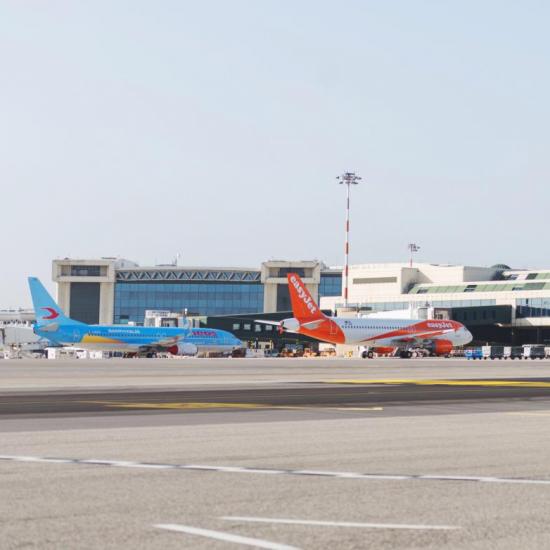 dB is used as unit of measurement of intensity because it is the smallest difference in sound energy perceivable by the human ear.

Intensity is not the only factor that contributes to the dangerousness of noise: exposure duration is also very important. This aspect is factored in by using sound levels with time weighted average. (Source: European Agency for Safety and Health at Work).

Every one of us perceives noise and reacts to it differently. This means that perception is a very important factor. Attitudes and reactions are relevant as a measure of the effects of noise, but cannot be used as a scientific measurement method. Perception varies not only between different people but also in the same person, e.g. depending on white noise. The same noise could be perceived differently also depending on what the person is doing, the weather or the state of mind.

A noise analysis distinguishes between aviation and non-aviation noise according to the source. For aviation noise, the law indicates specific describers.

The noise produced by aircraft is characterised by a relatively limited number of events throughout the day, and by fairly high maximum sound pressure values. Despite its short duration, the noise produced by an aircraft has a high level of intensity, variable according to several factors such as type of aircraft, altitude and route.

The noisiest events are recorded when aircraft takeoff and land; the acoustic impact area is represented as isolevel curves, or lines delimiting areas having the same airport noise level (LVA) around airports. (Source: ARPA Lombardia).

Measured and processed data are made available to the municipalities adjacent to the three airports, and of course to the authorities (Regional Government, Provincial Government, ARPA, Ministry of the Environment). The index defined by Italian regulations to describe noise in this context is the airport noise level (livello di valutazione del rumore aeroportuale, LVA.)

The airport noise level is determined on the basis of the logarithmic average of daily LVAJ values (LVAJ is the aviation noise index monitored over 24 hours). The Lva index is determined as the average of the three weeks with the highest number of movements throughout the year, in accordance with Ministerial Decree of 31 October 1997.