In those areas where SEA has independent decision making authority, the Group’s commitment is evident, and the results are also visible.

Air quality in the Malpensa area

The atmospheric impact of airport activities relates to a series of main emission sources, including vehicular traffic inside and outside the airport grounds, means used for loading, unloading and ground handling operations and aircraft movements and their Landing and Take-Off (LTO) cycles.

As an airport operator, SEA is not directly involved and cannot control airline specific processes, such as the technological evolution of fleets, their emissions efficiency or the definition of flight routes and scenarios. Nor can it directly control the amount of external vehicular traffic that is closely correlated with the level of intermodality of the territorial context in which the airport is located.

To ensure effective air quality control the Regional environmental protection agency of Lombardy (ARPA) monitors on a daily basis the presence of atmospheric pollutants across the entire region through 158 monitoring stations.

In the province of Varese, the air quality recording network comprises 7 fixed stations, 2 mobile stations and 4 gravimetric sampling instruments for the measuring of soft dust. The average figures, established by the daily results published by ARPA for the Malpensa area, are collected from a monitoring station in the immediate vicinity of the airport (Ferno) and from the other stations located in urbanised areas (Busto Arsizio, Varese). 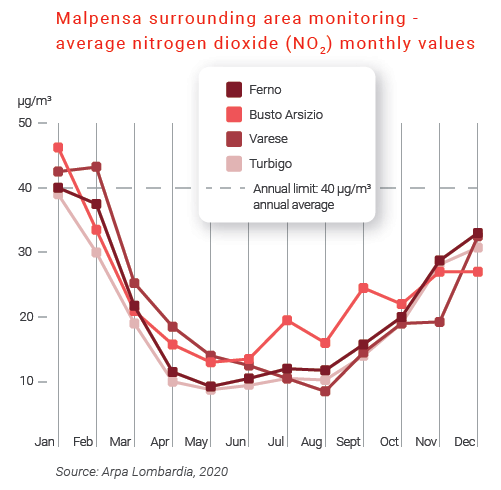 Air quality in the Linate area

For Linate the average monthly values are considered, established by monitoring stations in the immediate vicinity of the airport (Limito-Pioltello) and of other stations in urban areas (Milan-Città Studi, Milan-Marche, Monza). 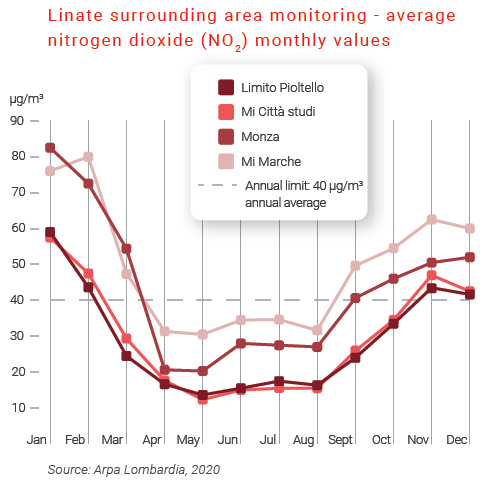 Overall, based on the range of data collected from the areas neighbouring the two Milan airports, over the years - although the airports comprise a significant source of emissions - no significant differentiation exists between the quality of air compared with other areas of the provinces. 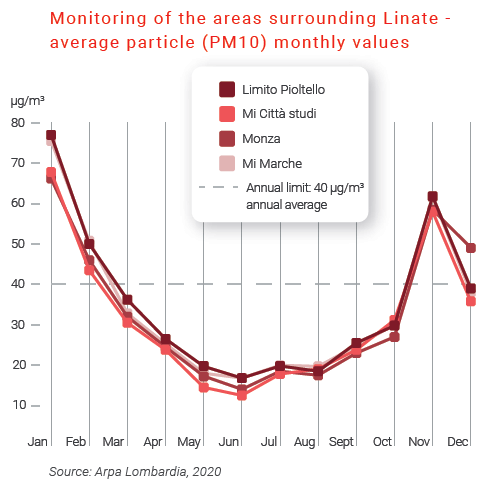